HOW WE PREPARE PESTO ALLA GENOVESE

We made another big batch of pesto recently and Karin took many pictures of the process. It is not difficult, but it may be useful to show the steps. As I noted in the recipe archive we use mortar and pestle because we prefer the smoother texture than is possible with a food processor. It’s also a lot of fun to beat the nonsense out of a bunch of basil leaves and pine nuts and finally, the name, pesto, derives from the pounding action of the pestle.

We are going to make pesto alla Genovese here, which means using a good bunch of basil, some pine nuts and two hard Italian cheeses. There are many other varieties and you can use your imagination, for instance replacing the basil completely or in part with flat-leaf parsley, or using rocket (rucola, salad rocket, arugula, rauke) or spinach, and walnuts, almonds or pecans). You can also try other varieties of cheese, however only very firm, dry cheeses can be recommended. We have made some very nice pesto using nut oils, too.

To begin with it’s always a good idea to have all the equipment and ingredients right in front of you. 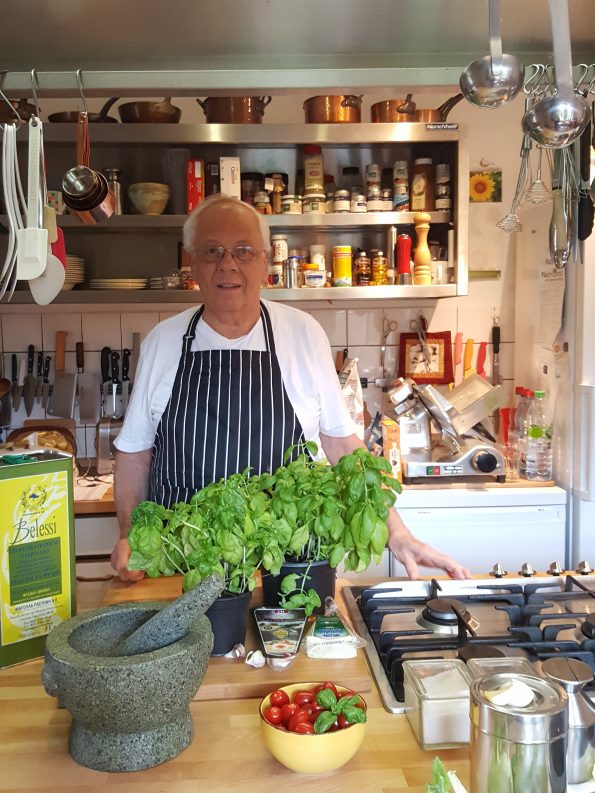 We need two big bunches of basil, garlic, olive oil, coarse sea salt, pine nuts, Parmesan cheese, Pecorino romano cheese. For the amounts you can look at the recipe in our archive, but the amounts do not have to be exact.

We also need a mortar and pestle, cooks knife and perhaps a spoon for tasting. If you decide to buy a mortar and pestle go for a larger diameter mortar. You will be thankful because it will be much easier to keep all of the ingredients inside and not on the counter top. We prefer stone or basalt as they are nearly indestructible, do not pick up flavours or odours and are quite inexpensive. Marble is lovely, but usually quite expensive and ceramic is easily broken. Wood is not recommended because it is so absorbent that it picks up flavours and gives them up again the next time used. Garlic flavoured chocolate is not everyone’s cup of tea. 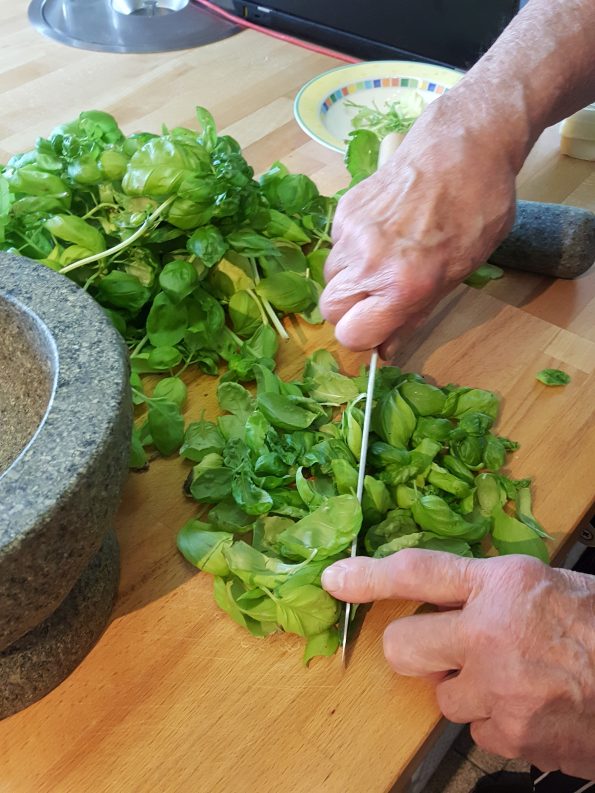 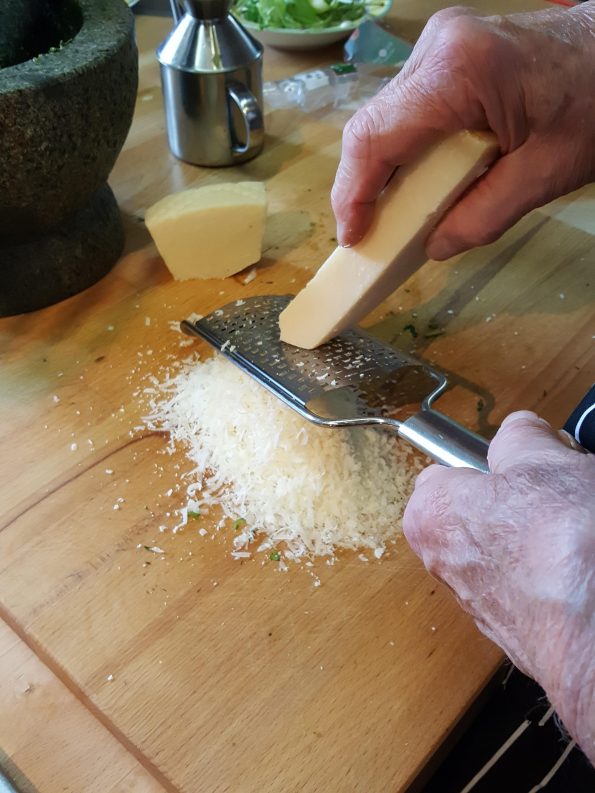 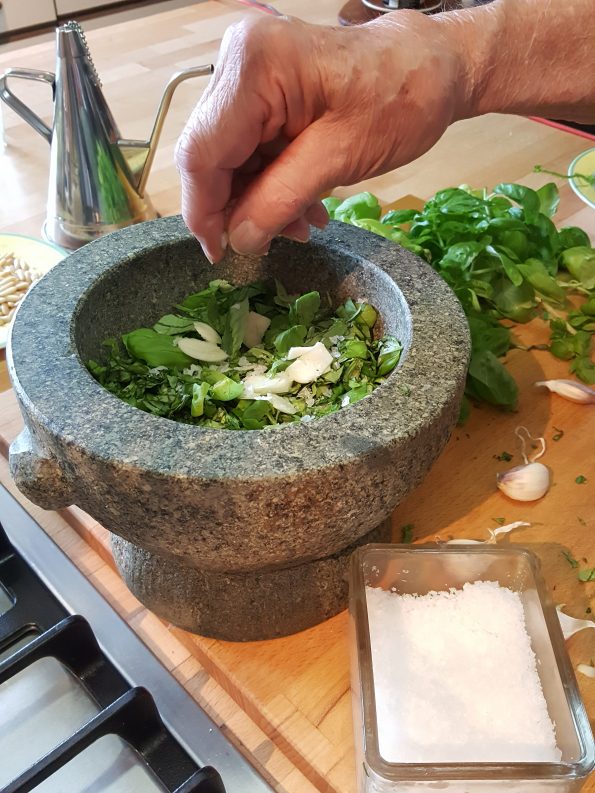 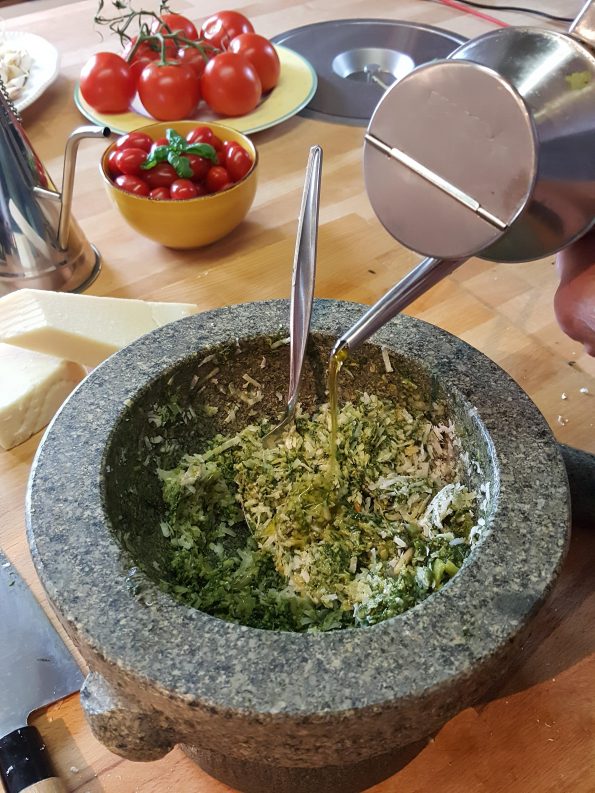 Chopping the basil coarsely makes the smashing process in the mortar considerably easier. The same applies to slicing the garlic.

Using a mortar and pestle takes some practice. The action is one of pounding and grinding. Not adding too much material at one time makes it somewhat less daunting a task and keeps it from flying out when bashing furiously. Speaking of which, the bashing is a great way to relieve inner tension and can be quite therapeutic. It’s also a way of connecting with the historical basis of cooking because the mortar and pestle have been used for food preparation for as long as 35,000 years.

Antonio Carluccio recommends beginning by smashing the garlic to a paste and then adding the basil and finally the cheese and pine nuts. I often do that, or I start with the basil as in these pictures. In any case you keep adding basil and garlic, then you can dribble some good olive oil in and begin a stirring action with the pestle. I like to use a peppery olive oil, but that is fully a matter of taste. When you have created an oily paste you can begin adding the cheese. Traditionally, a mixture of Parmesan and pecorino (from sheep milk) is used and you can’t go wrong if you stick with that. You can also just use Parmesan or try another hard cheese such as grana or even a year-old Gouda. This would not be wrong as Dutch cheeses were highly prized in Italy in the 18th and 19th centuries and were apparently often used in pesto. In any case an old Gouda adds spice to the pesto! You can keep adding cheese and oil until you have a smooth mixture and then begin adding the pine nuts. I don’t smash the pine nuts to a paste, but leave them as small chunks. Again, this is a matter of personal taste. The controversy of whether to roast the pine nuts or not is certainly also a matter of taste. I have stopped roasting them because I like the creamy consistency the unroasted pine nuts have when mashed, but the roasted add another dimension through the roast aroma. Try both and see which you like best, or do as we do and toss some roasted pine nuts onto the finished pasta. Add plenty of oil and put the pasta on to cook because your pesto is now ready to be enjoyed at the table! 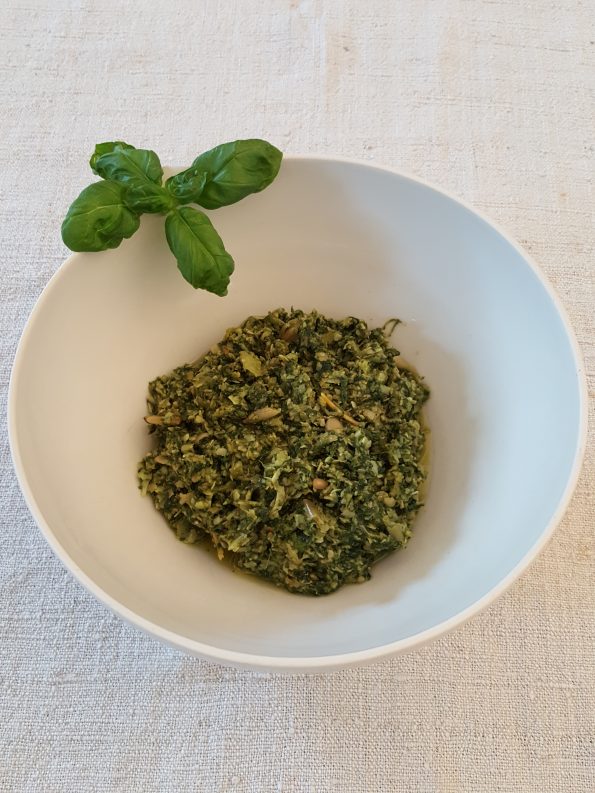 We hope you enjoyed this somewhat detailed discussion of this wonderful Italian specialty. Next week we will have some new recipes to share and hope you will join us then. 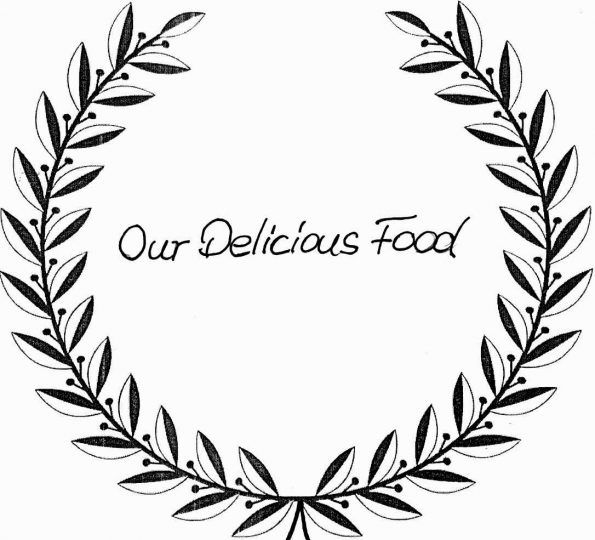